In this public art project, the Totems, which famously lived outside Hall Place’s granary in the early 2000s, were repainted and resurrected. With a long history dating back to 2001, the Totems have been a signature artwork for Centrepieces Mental Health Arts Project and started as a community-based project. After the initial success of Centrepieces’ first public arts project, ‘The Worrier’ (1999), the Totems sculpture was generously funded by The Kings Fund. In its original incarnation, the totem pole project was led by John Exell and Guy Tarrant, with close artistic support from Kim Campbell and Stacy McCarthy.

Initially titled ‘It’s A Breeze’, the Totems toured various community centres around the London Borough of Bexley with the support of the now defunct Bexley Council for Racial Equality Department. The sculpture had residence in Thamesmead’s Vietnamese Centre, Belvedere’s Indian Centre, and was displayed for the benefit of various other groups, including a local Somalian group and a youth group in Slade Green.

The pole was made following an exploration of breeze-block, a useful starter carving stone. Resident artist John Exell has been chiefly responsible for developing Centrepieces’ use of this material and assessing the sculptural potential for breeze-block to be employed in future projects. The project’s sculptors took a collaborative jigsaw approach to the piece’s development, whereby each block was carved by individuals or by pairs of artists; these blocks were then assembled to form a collective art piece.

Based on the totem poles of North America’s Pacific Northwest, our project was inspired by the iconography and spiritually significant design of Native American art. The Totem pole features various culturally significant emblems, symbols and colours, and is designed to be read as a visual narrative from the bottom of the pole to the top.

Now restored to their former glory in Hall Place’s Mediterranean Garden, the Totems have helped to forge a strong team of sculptors at Centrepieces. In addition, this signature project has promoted public awareness of the charity and increased our involvement with the local community at large. 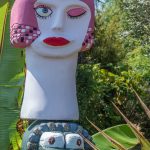 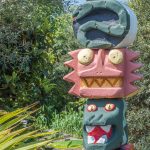 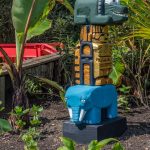 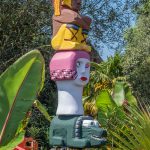 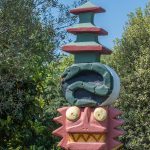 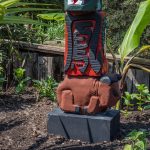 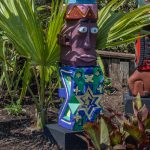 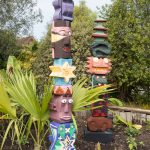 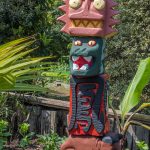 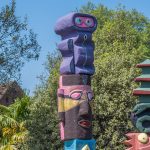 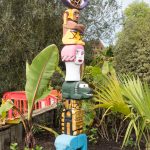 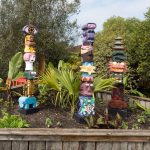 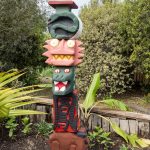 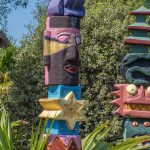 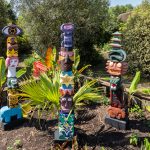